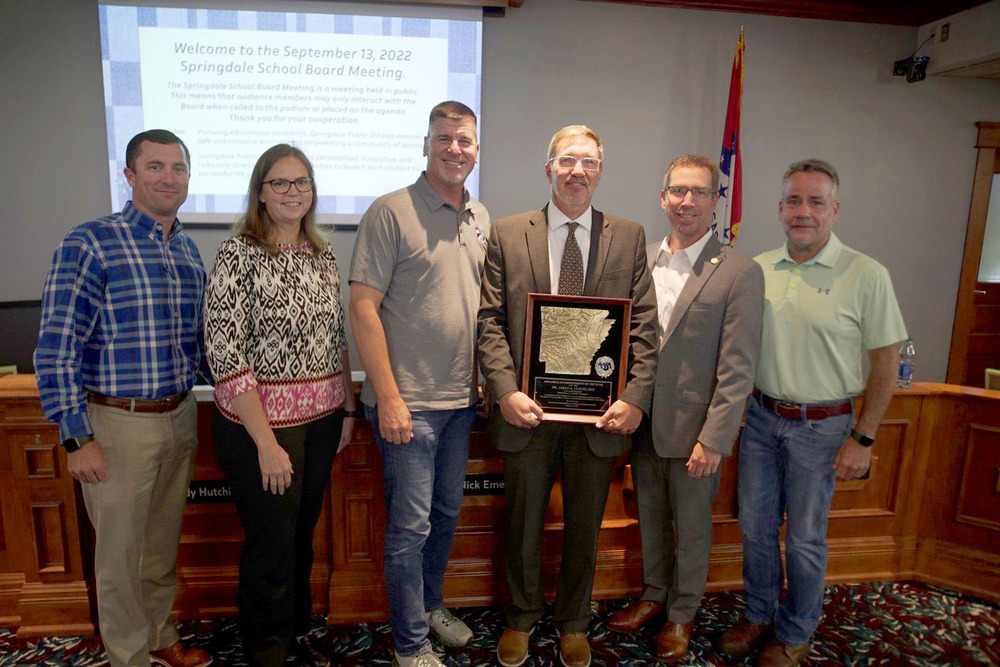 Dr. Jared Cleveland, Springdale Public Schools superintendent, has been named the 2023 Superintendent of the Year. He was surprised during the September School Board meeting.

“I am thankful! When people pour into you, there is an obligation to pour into others. Springdale has the best leadership team and certainly the best board. Thank you for entrusting me to do this work” said Dr. Jared Cleveland, Superintendent of Springdale Schools.

“He is passionate about his work and family and is an excellent team builder,” said Randy Hutchinson, Springdale School Board president. “His work as superintendent in Springdale, the largest district in the state, has been outstanding, making him more than deserving of this recognition. I look forward to working with him for many more years.”

Cleveland has served the Springdale School District for more than nine years, Hutchinson said. He served his first seven years as the district deputy superintendent and was chosen to become superintendent in July of 2020.

“He hit the ground running as he navigated the early days of the pandemic, and he has always been great at thinking outside the box to best serve the students and staff of our district,” Hutchinson said.

Cleveland is in his 29th year in education and is passionate about preparing students to enter the global workforce through the integration of technology, real-world applications and rigorous instruction, according to the AAEA award press release. His educational mission is to develop minds that think, hearts that care and hands that serve.

The American Association of School Administrators National Superintendent of the Year program is sponsored by First Student, AIG Retirement Services, and AASA, according to a Arkansas Association of Educational Administrators press release. The award pays tribute to the talent and vision of the men and women who lead the nation's public schools.

Candidates are judged on the criteria of leadership for learning, communication, professionalism and community involvement, according to the release.

This is the third time a Springdale Public Schools superintendent has been honored as the AASA Superintendents of the Year. Rollins was recognized with the recognition in 1992 and 2004.

Previous AASA Superintendents of the Year include: