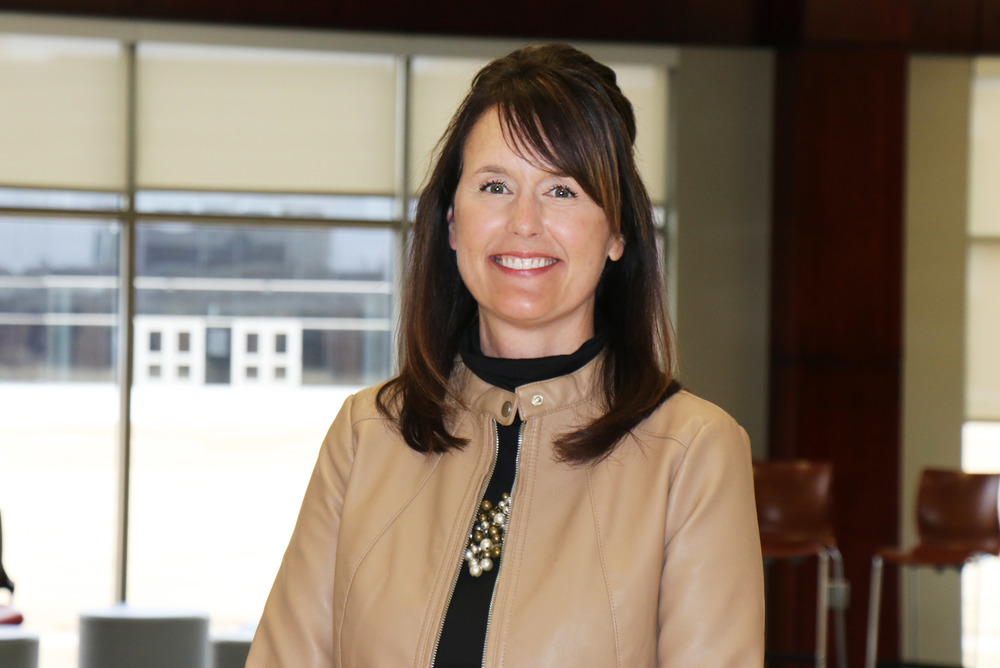 SHAY HOPPER LOVES CHOICE
Shay Hopper loves choice. She always has. That’s why she loves the choices the Springdale
Public School District offers its students. In her role as assistant principal and director of the Virtual
Academy at the Don Tyson School of Innovation, Hopper is instrumental in helping parents make he best
choice for their students.
“In Springdale we have tried to create every pathway for every student,” Hopper explains.
“Virtual is not for everyone but parents need to know all the options so they can find the best one for
their students. My job is to help families make the best decisions with the understanding that things can
change from year to year.”
In her third year in the district, Hopper has overseen explosive growth in the DTSOI VIA (Virtual
Instruction Academy). There are currently 2,609 students enrolled virtually in kindergarten-12 th grade.
Two years ago, when the academy was for grades six-12 only, there were 100. Obviously, COVID-19 has
been a factor in the amazing growth.
“The timing was great for me to come to Springdale since they were ready to take virtual to the
next level,” Hopper says. “Anne Martfeld, an assistant principal at DTSOI at the time, invited me to visit
the DTSOI to see the school. I was amazed. Shannon Tisher was the principal at the time. She hired me
as an instructional facilitator and the virtual academy was part of my responsibility.”
Hopper accepted the position at Springdale because of her love of choice. She helped start the
virtual school at Fayetteville High School and thought she would never leave that district.
“I taught Arkansas history, civics and yearbook for 13 years at Woodland Junior High,” Hopper
says. “When Fayetteville made the decision to move ninth graders to the high school, I went a year early
to prepare. I taught journalism and social studies for three years at FHS. I became part of a large-scale
planning group and that was a tremendous learning experience. I learned what vision should be. It has
served me well in Springdale.”
Hopper might have been in Springdale sooner but there were no positions available for her after
she finished her internship as a member of the University of Arkansas’ masters in teaching program. She
interned at Tyson Middle School, Springdale High School and Southwest Junior High.
“I had a phenomenal year in Springdale,” Hopper recalls. “I cried when it was over. But, when it
came time for a job, Woodland was the school with an opening in social studies and journalism. I loved
being yearbook teacher and still talk to some of my yearbook students.”
She also loved teaching Arkansas history. In fact, she wrote the current textbook being used at
the middle levels of education in Arkansas.
“I came to Arkansas from Texas where state history was a big deal,” Hopper says. “During my
years at the University of Arkansas I was never required to take Arkansas history. While I was at
Woodland I met the head of the UA Press and he asked me what I thought of the Arkansas history
textbook. He wanted my honest opinion so I gave it.

“I told him it was too academic, dry and visually unattractive for middle level students. We met
again and eventually he asked if I would write a new textbook. I worked three years on it. One summer I
drove all over the state and visited with teachers. I wanted to know what they thought and wanted
them to have ownership in the textbook. I met two of the Little Rock Central nine that integrated the
school. The Shiloh Museum was helpful. It was a rich experience.”
Hopper has had plenty of rich experiences in her life, many because of choices. A member of a
fifth-generation family in Conroe, Texas, she was the first to leave the state when she decided to attend
college at the University of Arkansas.
“Both of my grandmothers and my mother were teachers in Conroe,” Hopper says. “In fact, a
school in Conroe is named after one of my grandmothers. My dad was a member of the school board.
One of my grandfathers ran an auto parts business his father started in the 1930s and the other was an
optometrist.
“We traveled extensively as a family. The summer between my junior and senior years of high
school my mother was adamant I look at several colleges so we drove about 3,000 miles and visited 17
colleges and universities. We had been to Vanderbilt, Duke, Wake Forest, William and Mary, Kentucky,
South Carolina and several others.
“Fayetteville was not a planned stop but we were driving through at the end of the trip. As we
went on a campus tour I told my mom ‘this is where I am going to school.’ She said we would have time
to think about it but I knew the University of Arkansas was where I wanted to go. Something about it
spoke to me and I’ve been here just about ever since.”
Hopper was a journalism/public relations major and needed a summer job after her freshman
year. Her grandfather connected her with a Texas State Optical office in Fayetteville and she became an
office optician. After graduating, she spent 11 years as an optician.
“I eventually went to work for Jay McDonald,” she says. “He and his wife mentored and
encouraged me. I did a lot of marketing and helped with their professional development for other
doctors. Dr. McDonald was on the cutting edge. He was streaming professional development in 2001,
long before we called it streaming.”
Working as an optician also allowed her to meet her husband, David. She recalls, “I sold him a
pair of glasses. He was flying for Northwest Airlines at the time.”
Northwest eventually asked David to relocate to Memphis so Shea, with Dr. McDonald’s help,
secured a position with Vision America, a company with 270 optical practices throughout the United
States.
“I traveled all over the country,” Hopper says. “I would evaluate practices and did marketing and
public relations. I was immersed in the community. I worked on several military bases, which was a new
experience.
“I was there for two and a half years when David and I relocated to Fayetteville. Vision America
had sold so they told me I could move to Canada or take a severance. I took the severance and that’s
how I paid for my master’s in teaching from the UA.”

Once she earned her master’s, her educational career began, first in Fayetteville and now in
Springdale. Her husband now flies for Tyson Foods. Both of them still love to travel.
Where is her favorite place to visit?
“I’ve been fortunate to travel to so many places it would be impossible to pick one,” Hopper
answers. “I’ve been all over Arkansas and love the state. David and I still enjoy visiting college campuses.
In a normal year he and I and a group of friends make one Razorback road trip together. We try to go
somewhere we’ve never been. We really enjoyed Athens, Georgia and Lexington, Kentucky.
“I love New York City and the beach. The coast of Maine is fabulous. I’ve been as far away as
China. China had a significant impact on me because it is so different culturally.”
For all of the choices she has made and the travels she has enjoyed, Hopper wouldn’t change
one aspect of her life today. She says, “I love working at the Don Tyson School of Innovation. I can
truthfully say there hasn’t been one day I haven’t looked forward to going to work.”
Exemplary teachers like Shea Hopper are among the reasons Springdale Public Schools are
#THEChoice.