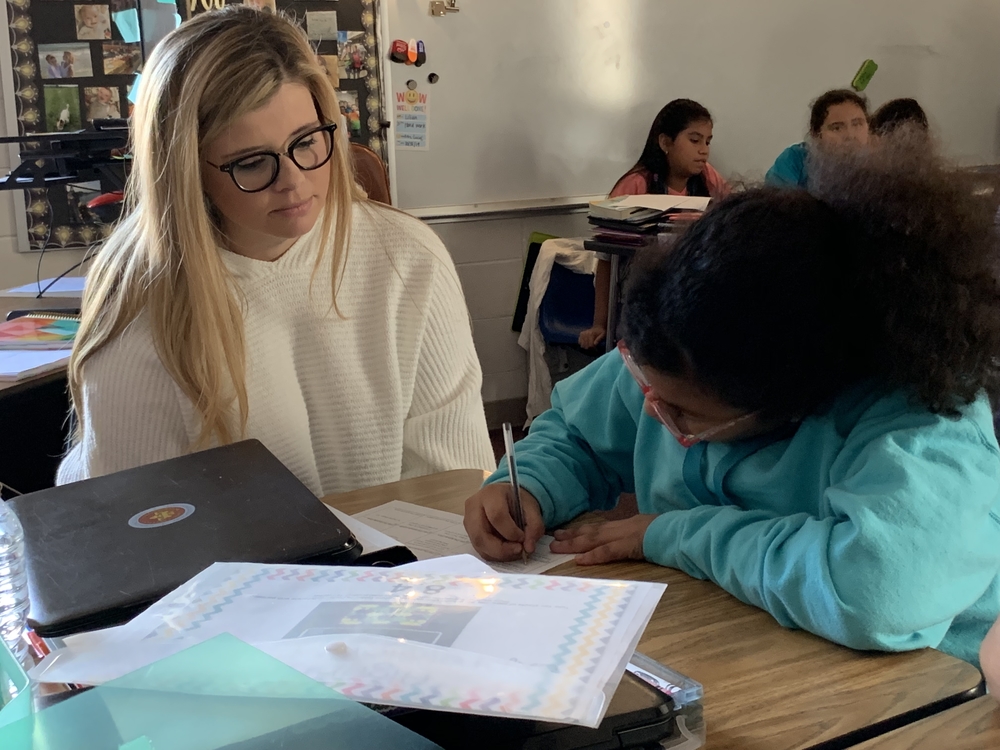 Since her father was an engineer, Anna Shaw grew up thinking about a career in engineering. Her pathway changed when her mother, knowing how much Anna loved math, suggested her daughter would be an outstanding math teacher.

“I loved math growing up,” says Shaw, a sixth grade math teacher at J.O. Kelly Middle School. “My dad was great at math and always helped me, especially when it got harder. I got my first taste of algebra in sixth grade. It was challenging at first but gave me a foundation for understanding how math works. It wasn’t just memorizing.

“When I started college at the University of Arkansas my love of math and my mom’s encouragement to consider teaching created buzzing in my head. Taking introductory classes in math and teaching at the UA convinced me to teach.”

The results have been amazing. Not only is Shaw recognized as one of the top math teachers in the Springdale Public School District, she earned the Presidential Award in Excellence for teachers in math and science.

“I knew I was one of the nominees for 2018 but they are always behind in announcing the winners,” Shaw says. “I received a confidential email telling me I had won. I could tell my immediate family and principal (Sara Ford) but that was it until the official announcement would be made public. It was a silent celebration. I was excited. When I told Sara Ford she was so kind and sweet. My family was very supportive.

“It was two weeks later before the announcement was made. In fact, I was already in Washington, D.C., for the ceremony.”

Shaw, who had visited the monuments on a family visit to Washington, D.C., when she was in high school, enjoyed her first day in the nation’s capitol as it was spent in professional development with winners from all 50 states.

“We worked together with the other state honorees and we were led by previous winners,” Shaw explains. “I learned a lot and it was great networking. That night we had a nice formal dinner at the Kennedy Center.”

Her trip was shortened, however, when she learned her son was sick and was being admitted to Northwest Arkansas Children’s Hospital.

“I missed visiting the White House and the awards ceremony,” says Shaw. “I changed my flight and came home the next morning. When our hosts found out I had to leave they came to my room about midnight with my presidential citation. They couldn’t have been nicer.”

As soon as Shaw arrived in Springdale her concern was for her son, who ended up spending eight days and nights at Children’s. Her son has recovered and is fine now. So, life is back to normal again for Shaw, who enjoys every day she teaches at J.O. Kelly.

“I love teaching,” she says. “I love our students and seeing the growth they make over the year. Many of them come into the class not loving math. I help them grow into loving math. I teaching a little differently. Differentiation is most important. In math there isn’t always a lot of differentiation but I used it in all my subjects when I taught at Jones Elementary.

“So, in our class everyone is on his or her own learning path. It is individualized instruction. If you come into my class you may see 28 students working on 28 different things. At the end of the year they will leave believing they can do math.”

Shaw credits Springdale for developing her teaching methods. She notes, “The University of Arkansas prepared me to teach but there has been so much additional training in our district. Springdale has the best instructional strategies.

“When I was at the UA I interned at Harp Elementary, then my first job was at Jones Elementary. This is where I wanted to teach. Teaching in Springdale has enriched my life. I have a better understanding of life in general. Teaching in our district is about loving people and having a servant’s heart to make the lives of our students better.

“I have grown so much from Springdale teachers, students and district leadership. The entire team has made me the teacher I am today.”

Is she content to stay in the classroom for a while?

“I have known what I wanted to do for years,” she responds. “My degree certified me to teach pre-k through fourth grade. So, I started at Jones and was there for four years. I did fifth and sixth grade endorsement because my heart is with sixth grade. I am in my fourth year at J.O. Kelly and am very happy with what I am doing.

“At some point in the future I would like to teach pre-teachers at the university level. There are no immediate plans for that and being in the classroom is where my passion is right now. But, someday I would like to be a benefit to pre-service teachers. It is so helpful to learn from those who have actually been in the classroom.”

Don’t worry J.O. Kelly students, Anna Shaw is young and plans to teach several years before stepping into another role. She is another reason Springdale Public Schools are #THEChoice.