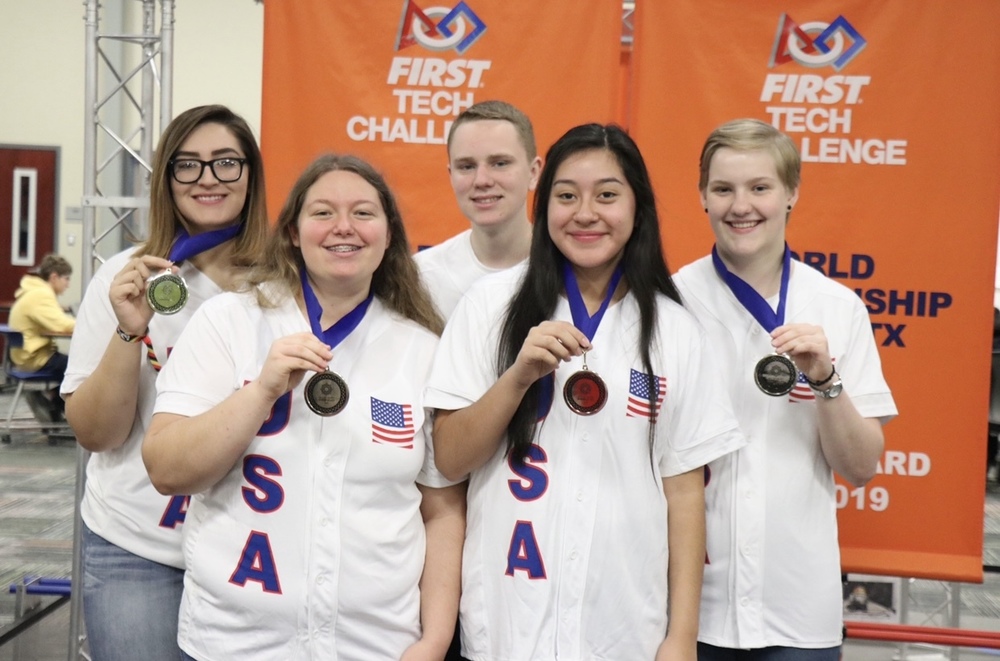 Initially exhausted by the travel but elated by the experience, members of the Don Tyson School of Innovation Root Negative One robotics team are back in their classrooms and already preparing for their next adventure.

“We got back Monday evening after 16 hours on a plane and a bus ride from Dallas and Tuesday after school we were meeting about this year’s robotics season,” said senior Abby Herrera. “We are a little behind in building a new robot but we have definite goals for this year. For many of us this is our last year in high school and we want it to be even better than last year.”

Last year was incredible as Root Negative One earned the Inspire Award at the World Championships in Houston. That led to representing the United States at the Global Championships in Dubai, where they won a silver medal for their engineering notebook. Overall Team USA finished 66th out of 191 teams.

“Winning the silver medal was a highlight,” said Sara Manos. “Meghan (Boes) and I are the lead engineers so that was special for us.”

Boes added, “We were ecstatic to win the award. We wanted the gold but the UAE (United Arab Emirates), the host country won. It was a great honor to receive the silver medal. Documentation is something our team is really good at. With so many different teams, not everyone won anything.”

All five team members who competed thought the highlight was interacting with members of teams from so many countries. Was language a barrier?

“One of the requirements was at least one member of every team had to speak English,” said Herrera. “We were representing the United States so we made an effort to be as kind to everyone as possible and to help whenever we were asked. I am proud we distinguished ourselves as kind and helping.

“There was pressure on us because the U.S. is known for technology, business and so many other things. The image of our country in the minds of many is California and New York. We had to explain where Arkansas is. Our medal, which is the nicest we have ever received, may have been for representing the United States but we considered it a medal for Springdale and Arkansas.

Dru Samuelson, the teams’ instructor at the DTSOI, noted, “The support we received from the community of Springdale was overwhelming. Springdale is a unique community in that its citizens support so many different things. You would never believe a community would be so supportive of something like robotics but people in Springdale made this trip possible for us.

“We are extremely appreciative. Saying thank you seems so inadequate. Everyone was so supportive. But, Springdale has always been supportive of projects like the Don Tyson School of Innovation, the Archer Learning Center, Downtown Springdale and so many others. Our community does so much to impact the lives of our kids. It’s great for our students to see what a great place Springdale is to live in.”

Of course Springdale is nothing like Dubai, where the average temperature was 95 degrees while the robotics team was there.

“We didn’t get much of a chance to sight see because we worked 12-14 hours a day,” said Manos. “But, we did have time to talk to other teams. I talked with the coaches of the teams from Canada and Switzerland. We worked with Team Syria and Team Eritrea (in Africa). We had been mentoring those teams and we met them for the first time.

“A major goal of the Global Championships is for international cooperation. I think they accomplished that. Politics were not involved.”

Bryant Cassady appreciated the non-political aspect. He said, “The highlight was talking with members of other teams. There was nothing political with teams from Syria and everywhere. So much happened so fast it’s amazing we were there. Now we are back. While it was the trip of a lifetime, I believe there will be other opportunities in the future.”

Catalina Peterson, another team member, hopes there will be more opportunities. Robotics has opened new doors for her.

“Robotics has allowed me to travel,” Peterson said. “Our family has been to Mexico but other than that I had never traveled before being involved in robotics. The trip to Dubai was so surreal. I still didn’t believe we were actually going until we got on the plane.”

So, what lies ahead for Root Negative One?

“We want to continue to help other countries establish robotics programs,” Herrera said. “We have built some amazing relationships through robotics. Students who participate in robotics have more of a passion to go to college and develop better problem solving skills. Robotics took us to Dubai!

“Now we are getting ready for our regular season. We have another robot to build. There is no rule against winning the Inspire Award two years in a row but I would like to be one of the last six teams in actual game competition this year. Those six teams get to compete at Minute Maid Stadium in Houston, where the awards are given.

“We learned a lot from other teams. We had a good robot but it broke down three times and the scoring elements weren’t the same as we were prepared for. We had to make a lot of adjustments. We thought our robot was good but there were robots from other countries like China that blew us away. What we learned can make us better this year.”

Better? Better than the team that represented the United States?

“These students are amazing and nothing they do will surprise me,” Samuelson said. “It’s crazy to think going to Dubai was possible. These students have earned everything. Their work ethic is incredible. Robotics isn’t all they do. Abby is an intern at Tyson. Sara is a national merit semi-finalist. They all are involved in other activities, are strong academically and handle things with integrity.

“The travel was exhausting and I am not totally rested but it was an honor to represent Springdale, Arkansas and the United States with this great group of students.”

The trip to Dubai for the Don Tyson School of Innovation Root Negative One robotics team was a large group effort, another example of why Springdale Public Schools are #THEChoice.