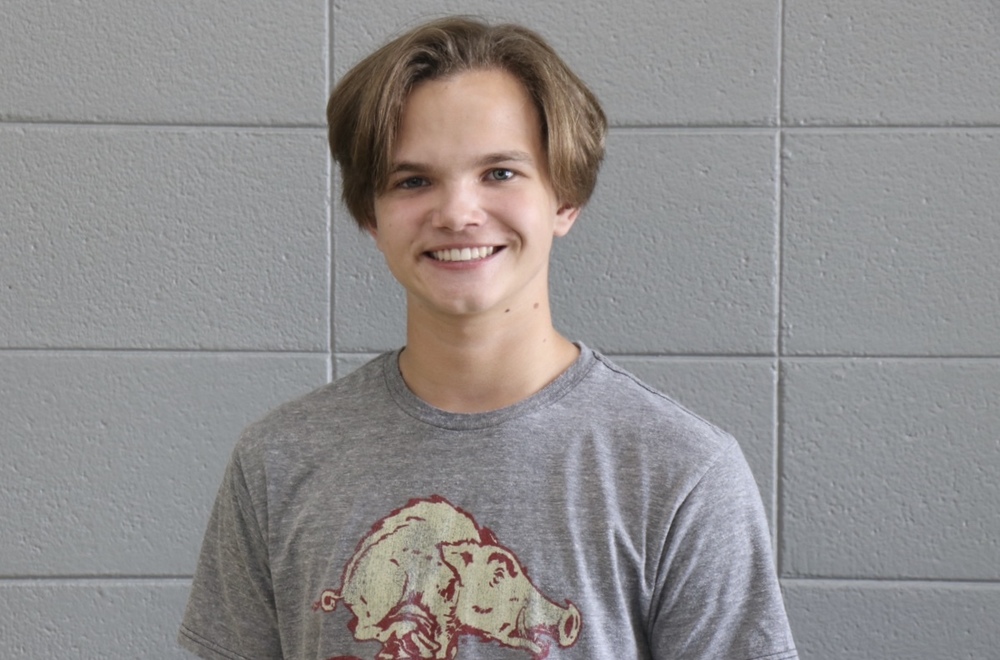 Knox Graham is a busy young man. He is heavily involved in EAST and debate as a ninth grader at Central Junior High. He also plays the trumpet in the school band. He knows he has a lot of work ahead but he already is focused on his future dream. He wants to represent Northwest Arkansas in the United States House of Representatives.

“I am very politically minded,” says Graham, who had a leading role in the EAST program’s 9/11 commemoration. “You have to be up on politics for debate. We debate issues that will affect the community five, 10 and 15 years from now. I find those issues compelling.”

Proof of how up to date Graham is on political subjects is his invitation to compete for Springdale Har-Ber High School’s nationally recognized debate team. He debated on the junior high level as an eight grader but is working with the Har-Ber squad this year.

“Last year our students combined with Southwest Junior High to have one debate team,” Graham explains. “We did very well as a collective team. This year I am heavily involved with the Har-Ber debate team. It is awesome to be able to move up to that level of competition. Mr. (Joel) Brown (Har-Ber debate coach) has shown me some tips. In competition you have to develop your speaking skills.”

His favorite topics are domestic policies, especially economics. That’s where his desire to earn a spot in Congress comes from.

“I went to an economics fair when I was in the third grade at Tyson Elementary,” Graham responds. “I loved it at Tyson. It was a great school. The economics fair was big and complex. It stimulated my interest. Plus, my parents and grandparents are involved in a lot of economic activities.

“Money affects everyone. Economics is complicated because it is interconnected with so much. It’s important to gain control of the best use of money. That’s why I would like to be on the budget committee as a member of the House of Representatives. I want to represent Northwest Arkansas because it’s my home and I know the area well.”

In order to prepare for his political run, Graham would like to major in macroeconomics and political science. He has a few years to pick a college or university.

While he has time to make a college choice, Duke and Harvard are on his mind. Why? Because Har-Ber’s debate team has been invited to competition on both campuses this year. He would love to make at least one of the trips.

“There are 150 students, including other ninth graders, involved in Har-Ber’s debate program,” Graham explains. “Only 16 will make the trips to Duke and Harvard. My goal is to make one of the trips. That may be over ambitious for me this year. We’ll see.”

What about his involvement with EAST?

“EAST has given me opportunities I wouldn’t otherwise have a chance to have,” Graham responds. “There is so much choice involved. Students in EAST want to make a difference in their communities. EAST is an outlet for motivation and it provides legitimate results.

“At our 9/11 event, students did 99 percent of the program. We weren’t involved in getting vendors. Our teacher, Mrs. (Debbie) Lamb did that. But, EAST is rewarding because it allows us to develop skills we will utilize throughout our life. It teaches time management and cooperative effort.

“EAST has many technical aspects, like using a 3D printer, but I am not as interested in technology . I’m more passionate about public speaking. All of us in EAST have the opportunity to use our skills to do something important.”

Since he spends so much time with debate and EAST, how is Graham able to practice with his trumpet?

“I’m loud and obnoxious at times so the trumpet is a perfect instrument for me,” he answers. “I started playing the trumpet when I was in the seventh grade at Hellstern. I’m still learning. I practice whenever I can make time for it.”

While his days may be extremely crowded now, he has plenty of time to prepare for his political career. A citizen must be at least 25 years old to run for the House of Representatives. He may not be ready that soon but he’s already honing the speaking skills and economic wisdom that will make him a viable candidate.

Knox Graham is an example of how students are taking advantage of a multitude of opportunities, another reason Springdale Public Schools are #THEChoice.