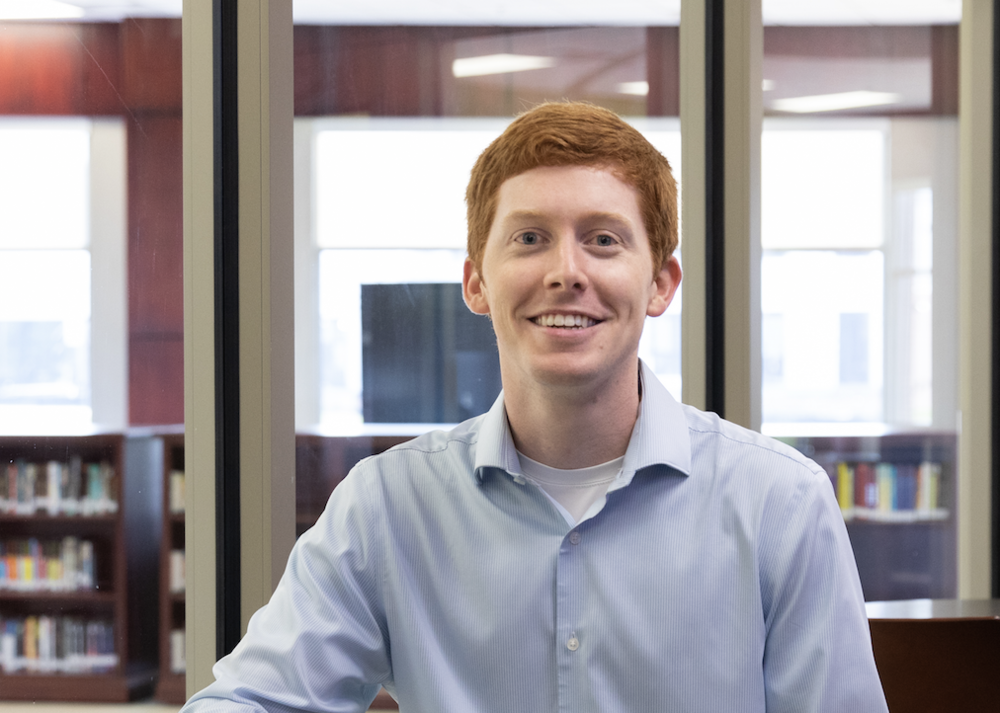 Lookadoo Changes Role, Is Teacher of the Year Finalist

Joel Lookadoo taught ninth grade algebra for six years at Lakeside Junior High. He liked it so much he gave up coaching basketball to devote his entire energy to helping students with math. Now his role has expanded beyond teaching in a single classroom as he begins a new role at the Don Tyson School of Innovation.

One of four semi-finalists for Arkansas Teacher of the Year, Lookadoo is now a math and science facilitator at the DTSOI. He will roam throughout math and science classrooms to “help design instruction and provide support for teachers.”

Why did Lookadoo, who will discover in late October or early November if he becomes Springdale’s first state Teacher of the Year since Justin Minkel, who earned the award a decade ago, make the change since he loves teaching so much?

“It will be good to be in a different environment,” he responds. “There are a lot of great things going on at Lakeside and in all the buildings in our district but it’s different in the Don Tyson School of Innovation. This will stretch me to become a better educator.

“It’s a different feel but I will still be in classrooms around students. Helping students is at the heart of what I do. I have to know I am making a difference. This is a new group of students and a new opportunity for me. Change can be hard but I am looking forward to this with excitement. There are new teachers that I get to learn from.”

Working with students is the reason Lookadoo became a teacher in the first place. He notes, “I love building relationships with students and going to a deeper level. They are real people with accomplishments, struggles and everything that comes with life. They are much more than just a grade. I love to help them reach their dreams. My passion is having a chance to impact students.”

When he was a student, Lookadoo was impacted by his instructors.

“The coaches and teachers I had inspired me,” Lookadoo says. “They taught me more than content. They taught me about life and leadership. They helped me become the best version of myself. Because of them, I want to do the same for our students.”

A basketball player while in junior high and high school, Lookadoo coached at Lakeside for his first three years. As much as he loved coaching, he asked to depart that role so he could spend more time helping his students.

“I wanted more time in the classroom,” he says. “I started a College Prep group. I helped navigate what it would look like for students to go to college. We visited the University of Central Arkansas (Lookadoo’s alma mater), Arkansas Tech and Missouri State. It gave our students a chance to dream.”

Lookadoo dreamed of teaching during his time at UCA and eventually learned of the opening at Lakeside from Brad Stamps, who had been his high school basketball coach.

“I was fortunate to have the opportunity at Lakeside,” says Lookadoo. “The leadership team is phenomenal. They shaped me, impacted me and supported me. Working together as a team grew me.”

The experience at Lakeside grew Lookadoo enough to make him one of four teachers being considered for Arkansas Teacher of the Year. Was he surprised to be named a semi-finalist?

“Knowing I was one of 15 regional finalists was amazing,” Lookadoo responds. “There are some great teachers in that group. To be named one of four semi-finalists is incredible. I am honored to represent Springdale. There are so many good things about our district that are well known at the state level. I love to do anything I can to advance Springdale.”

Whether he is named Arkansas Teacher of the Year or not, Joel Lookadoo is a great asset in a district loaded with superb teachers. Teaching excellence is another reason Springdale Public Schools are #THEChoice.