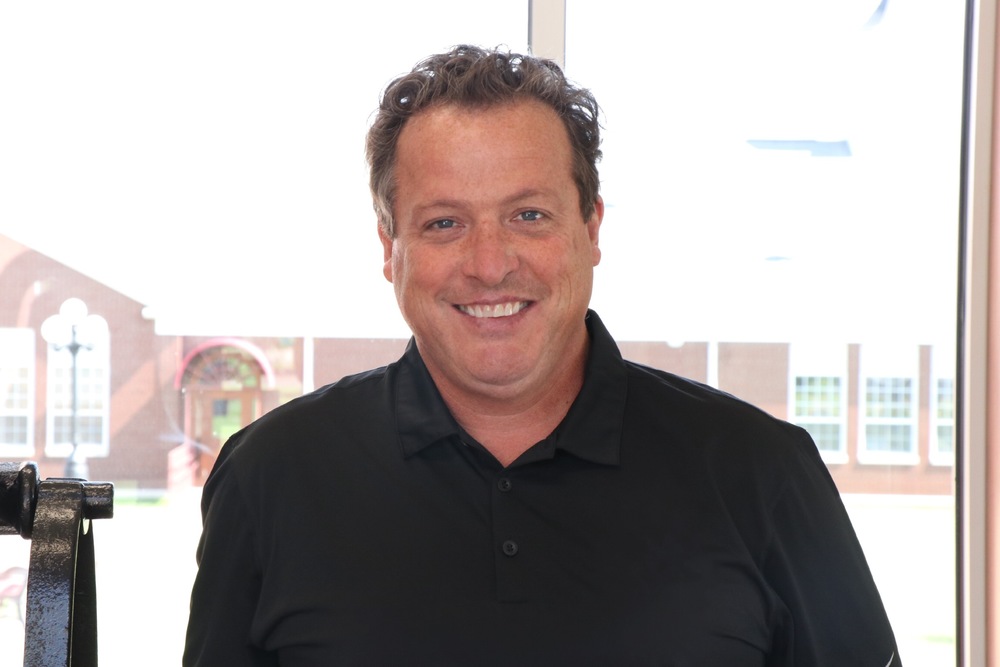 When Mike Fotenopulos graduated from Fort Smith Southside High School, he wanted to go to college but wasn’t ready. Instead he joined the Air Force before returning and earning a degree at the University of Arkansas. His lack of preparation when he finished high school is a driving force in his effort to prepare students for their futures once they are handed diplomas from Springdale High, Har-Ber High, the Don Tyson School of Innovation or the Archer Learning Center.

“When I was in high school I played football and hung around with the guys,” said Fotenopulos, who is in his third year as Springdale District’s academic coach. “I was not ready for the future. That has motivated me to prepare students for the next moment in their lives that I wasn’t prepared for.”

Is Fotenopulos, who was a high school Advanced Placement history teacher for 19 years before taking on his current assignment, highly motivated? In his brief tenure the number of “fives” on AP tests is up dramatically as is the number of AP exams being taken. His plan to advance Duke Tip qualifiers to National Merit Finalists is taking hold. And, students are being educated on workplace opportunities for those who choose not to attend college.

“We just received the results of the AP exams,” Fotenopulos said. “We had 168 scores of “five” by our students. We are preparing signs they can put in their yards documenting their success. We had 140 scores of “five” last year.

“Scores of three, four and five on AP exams allow students to earn college credits for those subjects at any college in Arkansas. That makes AP classes more desirable. More of our students are taking AP classes and AP exams. Their parents are seeing the benefits.”

High scores on AP exams and the PSAT and ACT tests are not coincidental. They are the result of  excellent preparation and instruction. Fotenopulos begins with seventh graders.

“We identify academic excellence early and determine which of our seventh graders appear to be Duke Tip candidates,” said Fotenopulos. “Our four middle schools and the DTSOI are involved. We prepare these students to take the full blown ACT while they are in seventh grade. Anyone who makes 30 or higher is a definite candidate to be a National Merit Finalist once he or she gets to high school.

“We have boot camp training with those students before they take the ACT. In boot camp we break down the PSAT or ACT into subsets. We teach them what curriculum and skills the tests are looking for. We give them practice tests and formulate a game plan for the real test. Just like an athlete who practices to play in a game, these students are practicing so they will get used to taking the test before they actually take it.

“Once these students go to the eighth grade, we follow up, have a boot camp to get them ready for the pre-ACT, then have them take that test. The pre-ACT is condensed and gives more feedback about grows and glows.

“We prepare our highest achievers to take the PSAT in ninth grade, a year before every student in the state takes it. This is where we groom National Merit students. It gives us a good idea of who our candidates will be.

“Every 10th grader takes the PSAT but the summer after their sophomore years, we take our best National Merit candidates and have a bootcamp to help them take the PSAT again for a possible improvement in score. The PSAT scores are an important element in becoming a National Merit Scholar. Then, every junior takes the ACT.”

The testing process shows not only who might be a National Merit Scholar, which brings large scholarship dollars as a reward, but also gives Fotenopulos insight into future possibilities for all students.

“Some graduates are like I was, not ready for college, and some will not want to go to college at all,” Fotenopulos said. “We prepare them for the job force or the military. You don’t have to have a college degree to have a good workable degree. But, you need to have perseverance and a good work ethic.”

After teaching AP history for 10 years at Bentonville High and nine years at Har-Ber High, why did Fotenopulos leave the classroom to become district Academic Coach?

He helps them in other ways, too. He is the liason with the Springdale Chamber of Commerce and its Junior Leadership Program. He noted, “We take six leaders from our four junior highs and the DTSOI and connect them with the Chamber’s Junior Leadership Program. These students visit businesses, see how city government works and see what it looks like to make a living in Springdale. It helps many of them visualize their dreams.”

Fotenopulos, whose wife is a teacher at Hunt Elementary, also connects with parents to help them visualize dreams for their students.

“Parents who have a student who makes a 30 or 31 on the ACT think that is great but don’t realize what another point or two will do,” said Fotenopulos, whose professional academic career started as a teacher at Greenland, where he spent five years before moving to Bentonville. “Students who make 32 or higher on the ACT and have a grade point of 3.5 or better qualify for the Arkansas Governor’s Distinguished Scholarship, which will pay nearly all expenses at the University of Arkansas.

“It’s important for students who are close to try again to make that 32. Most parents are unaware of the Arkansas Governor’s Distinguished Scholarship.”

The number of students scoring 32 or better on the ACT in the Springdale District is going up just like the AP numbers are. One of the reasons? An academic coach who is motivated to help plan students’ futures because he was unprepared for his own future when he was in their shoes.

Mike Fotenopulos and the job he does are another reason Springdale Public Schools are #THEChoice.